Hello,
We are developing a live meeting app, where meeting host can speak on their own or give a word to one of several participants (only one at a time). Thus, mixer stream can contain either single host stream or host and single participant streams. In the first case host stream must be full screen, and in the second case participant stream must be full screen and host stream must be decreased to a small preview somewhere in the corner. In other words, we need something very similar to "Picture in picture" layout (https://docs.flashphoner.com/display/WCS52EN/Stream+mixer#Streammixer-Pictureinpicture), but a dynamic one: it must be enabled by default, but then other stream may become a "desktop" one on the fly.
Is this possible with existing layouts, or we need to create our own layout class for this purpose?
K

Actually, I see that desktop layout is used (dynamically?) when a participant joins the meeting with "desktop" stream name, but "picture in picture" layout doesn't work despite of mixer_video_desktop_fullscreen=true setting.

Staff member
Good day.
For two person video chat, mixer seems to be excessive. You can just publish and play two streams from two participants, and change webpage or application layout on client side as you wish. In this case, you can use mixer to record the meeting.
But, if you prefer to use mixer, you should:
1. Enable picture in picture mode

Hello @Max ,
Thank you for your answer.

What we are developing is not a 1-to-1 chat, it's a conference, where only one participant can have a word at a time. During all the conference, all participants are watching it in real time, even those who are not speaking. And yes, we need to record it too. So I think mixer is the only option here, even though its possibilities are not used by 100%.

What you wrote about changing stream names makes sense. The only problem is in our specific workflow: we don't know the exact moment when participant joins the mixer, so we don't know when exactly we need to republish host stream with a different name.

For me, the best option would be to create a custom layout class. Because what we need is exactly "picture in picture" layout, but with one simple condition that sets stream precedence. Something like: "if stream name is exactly "desktop" it is fullscreen, else if it contains "desktop" it is fullscreen". In this case stream name containing "desktop" in its name will be fullscreen until stream with exactly "desktop" name appears. Maybe you'll find this change worth implementing in default WCS layout, but if not, can I see current "desktop" layout class code so I can make my custom one based on in?

Thank you once again for the reply.

I sat down to work on this and ended up discovering that our droplet is almost out of storage space. I traced the issue to
/usr/local/FlashphonerWebCallServer/logs/client_logs which has folders dating back to 2020-10-06 when we first set up the droplet on Digital Ocean. Some of the folders within are extremely large, for example client_logs/2021-01-18 - 13G

So at this point I have two questions:

1) Can you think of a reason why these log files have gotten so large
2) Would purging logs older than the past 2 weeks on cron cause any issues with the software?

If there is no issue with removing old logs, I will set up a simple bash script to run on daily cron and remove log folders older than 2 weeks. Thank you!

kindco said:
1) Can you think of a reason why these log files have gotten so large
Click to expand...

Please check if client debug logging is enabled, if yes, disable it by commenting the following line in flashphoner.properties file

Code:
If this is production server, we recommend also to disable clien logs at all

kindco said:
2) Would purging logs older than the past 2 weeks on cron cause any issues with the software?
Click to expand...

No, you can set up logs deletion older than two weeks by cron, for example

Now I wanted to compile the layout class, but got Java errors cannot find symbol for Box and BoxPosition classes. I updated the server (it was a bit outdated), but still get the same errors. So, my questions are: is there any possibility that WCS was updated incorrectly or incompletely? if so, how can I check this? how can I reinstall it?

I'm asking this because sudo ./webcallserver update says "You have latest version":

Staff member
You can install any version. It will be downgraded or upgraded depends on current version number.

Make sure you stop server before updating.

I already tried to, but it says that WCS is already installed.

And at the same time I'm still getting "cannot find symbol" errors: 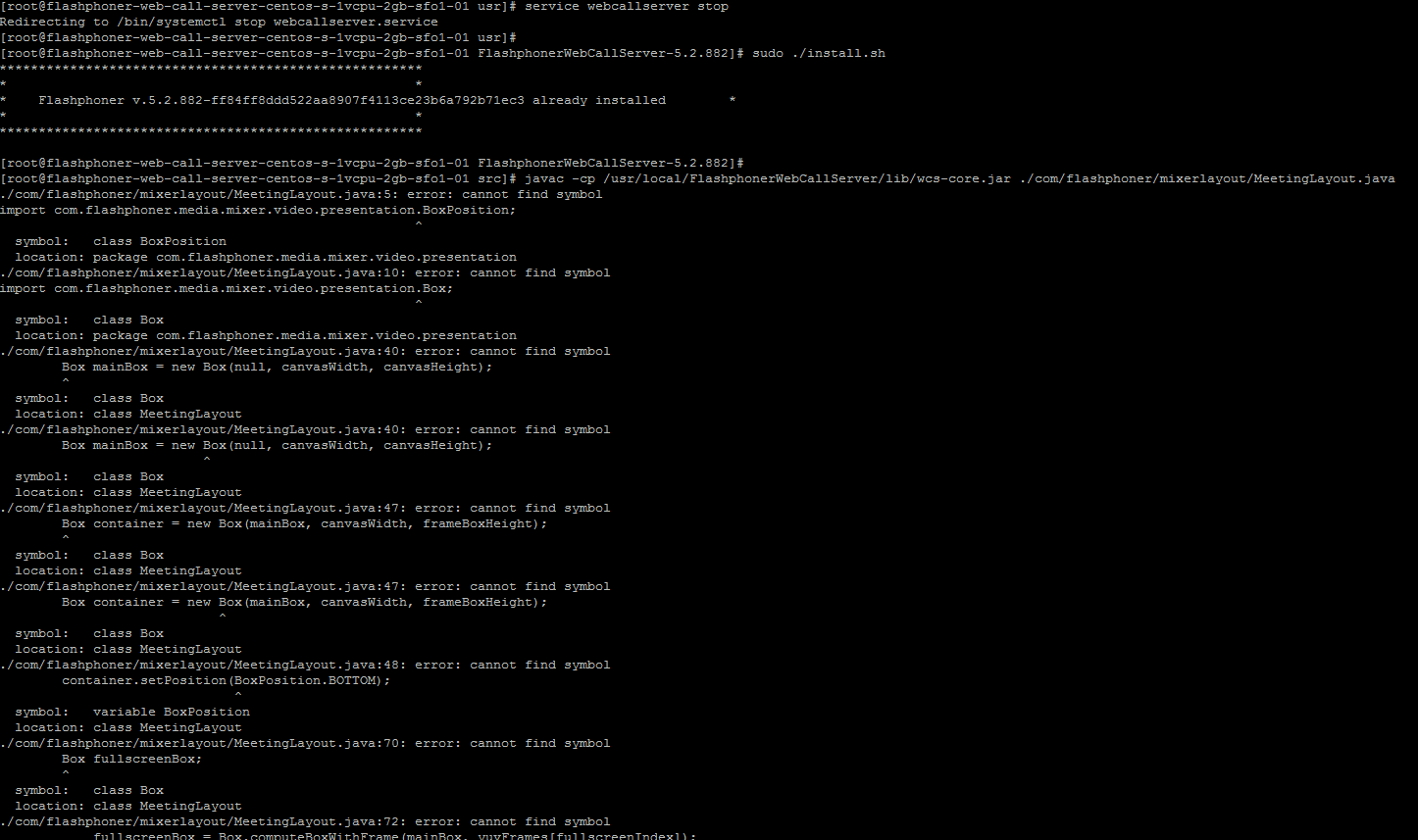 Staff member
There seems to be two different issues here:

kindco said:
I already tried to, but it says that WCS is already installed.
Click to expand...

1. Update problem. To check this, please provide us SSH access to the server using this private form, we will check.

2. Custom layout build problem. We raised the ticket WCS-3055 to fix this, and let you know results here.

Staff member
We've checked your server.
Seems like server is updated normally, but the previous build 5.2.874 is running from root. So it should be stopped manually

Code:
Then, it can be started as service from user flashphoner

./webcallserver stop returns FlashphonerWebCallServer: not running (I suppose you already executed this command before). Anyway, I tried both the commands you suggested, but demo site still shows version v.0.5.28.2753-5.2.874-cc1882d229ecf32ff112a0a0a0bdf117e28a46ac This means that old version is still running somewhere somehow, right?

Yes. In this case, use the command

Code:
to stop WCS process
Then restart service as described above.
K

@Max
Thank you, it seems old WCS instance is finally stopped
Waiting for layout build issue to be solved.

Hello, in this respect, can xml/java layout file be re-applied to a mixer? With java, can we manually call the "computeLayout" method to re-calculate layout on line 38?

As for what "kindco" user asked: I think this can be accomplished without re-publishing on the client side, however, it's going to be an overkill as you basically double the amount of streams.

This is an overkill as it doubles the amount of streams but unless there is a way of calling xml/java manually to re-apply layout I don't see any other way of how to manage layout in realtime with existing streams. This would have been a cool feature along with transitions.

Petro O. Bochan said:
This is an overkill as it doubles the amount of streams but unless there is a way of calling xml/java manually to re-apply layout I don't see any other way of how to manage layout in realtime with existing streams.
Click to expand...

Please look at the Custom mixer layout configuration with a special markup language. The template is applied per mixer participants, so changing the participants count you can change layout.
P

Thanks for info, but as far as I understand, there is no way of re-applying a layout either through java or xml on existing streams, is that right? A layout is updated only on stream create/delete, as far as i see.

Staff member
Actually, the custom layout is a folder with N files

Yes. You can set layout folder during mixer creation.