How to Initialize CDN Show_Nodes Results

Likewise, the node information in the PASSIVE state remains.
I always want to keep valid Nodes information. Or, I want to reset all information of CDN Nodes.
How can I do this?

sangsoo said:
Testing CDN in a number of ways has resulted in too many and complicated Show_Nodes results.
I want to initialize the results of CDN Show_Nodes.
Click to expand...

/rest-api/cdn/show_nodes query or CLIv2 cdn show-nodes command show current CDN state as it seen by a certain node requested. So the result of such query always contains a nodes list visible from one node (to which the query was sent).

Please clarify what do you exactly try to do:
- update one node settings?
- update WCS version on some nodes?
If you have to split CDN to an independent parts (for example, production CDN and staging one), please use the parameter

Code:
to list node IP addresses which will be allowed to connect to the CDN node

The node is detected as passive if this is cannot be connected by all the CDN nodes, or this is moved to PASSIVE state manually using /cdn/enforce_state query.

The CDN state information is always valid from node point.
In latest builds, we fixed some CDN signaling problems which may be critical for big widely spread CDN, and introduced CDN 2.4. This version allows to monitor and manage CDN signaling connections. For example, you can reset signaling connection between two nodes, in this case the connection will be re-established, and CDN state will be updated on those nodes.
Please update to the latest build from this page all the nodes in CDN and check.

I configured the origin and edge with Amazon ASG, and the Ec2 Instance(node).
After running with ASG policy, Terminated EC2 Instance(node) remained in show_nodes list.
I would like to remove the passive node already in the Show_nodes list without restarting each node WCS.
And, I used the "/cdn/connection/reset_inbound" and "/cdn/connection/reset_outbound" APIs, but this was not the desired result. 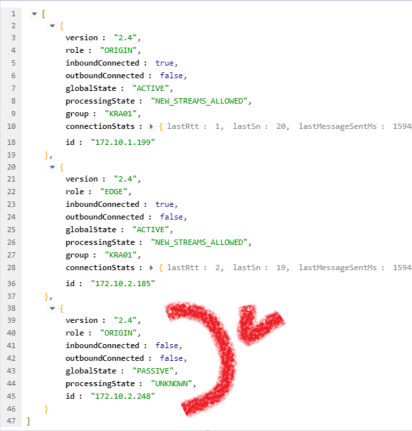 Now, PASSIVE nodes are not fully removed from CDN state. There is already the ticket WCS-2609 to implement this. We'll let you know in this topic.
As workaround, you can fiter PASSIVE nodes in request result.

Staff member
Good day.
We added the ability to remove a passive node from CDN in build 5.2.708. The documentation is here. Please update and check.
Last edited: Jul 24, 2020